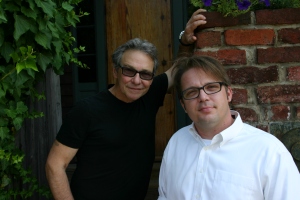 After 32 years, C&O Restaurant owner Dave Simpson is ready to pass the torch.

“Not only am I beginning to run out of steam,” says Simpson, “but after 32 years I’m running out of ideas.”

Don’t worry, Simpson says he isn’t going anywhere soon, but he has tapped the person he wants to run the restaurant that first put Charlottesville on the culinary map: former Keswick executive chef Dean Maupin.

“He’s someone I trust with the legacy of the C&O,” says Simpson. “He’s the perfect guy to pass the torch to.”

Simpson says he wants to hand over the C&O the same way he received it. Back in 1980, when he was a struggling young chef, original owners Sandy McAdams and Philip Stafford gave him a chance to run his own business. READ MORE