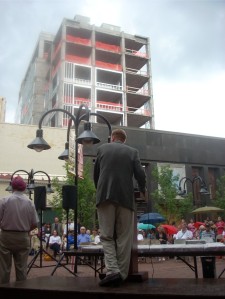 According to recently filed court documents, the ‘Landmark Hotel’ property on the Downtown Mall has now officially changed hands. On August 8, Atlanta-based developer John Dewberry, who won the property at auction for $6.25 million, officially closed on the purchase, to the partial relief of former owner Halsey Minor’s creditors. That amount is a far cry from the $23.7 million loan Minor took out, then defaulted on, to build the proposed 101-room luxury hotel.

The City was a winner, too, as a little over $160,000 in back real estate taxes, over three years worth that had gone unpaid, were finally paid. As reported in Hook, and nationally, Minor has left a trail of debt across the country since construction on the hotel came to a halt in January 2009.

“This is an exciting step forward, both for the City of Charlottesville and for those creditors who are owed money,” says Bill Shmidheiser, a lawyer who READ MORE