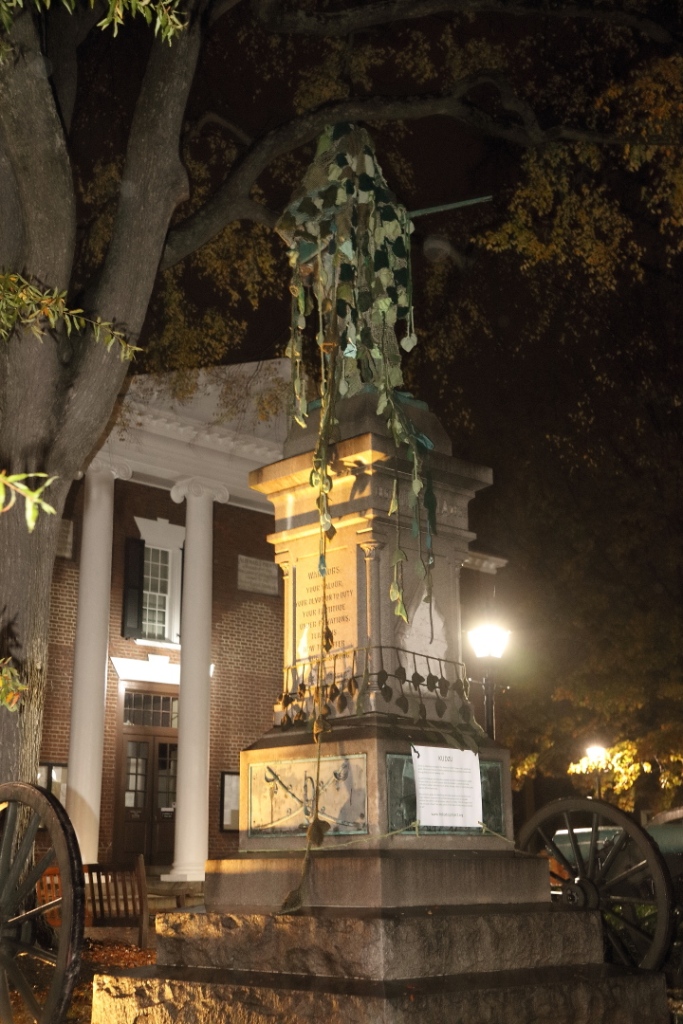 Before sunrise this morning what looked to be a shroud of kudzu covered the Confederate Statue Memorial in front of the Albemarle County Courthouse, the result of a “guerrilla knitting” effort to send a message about Confederate statues on the day “crying nazi” Christopher Cantwell is scheduled to have his first preliminary hearing. The “guerrilla knitting installation,” designed to look like kudzu, was created by a group of knitters from around the country. The knitters made simulations of leaves and vines to form a large natural-looking shroud to cover the statue with, and had hoped to put it up secretly under the cover of darkness. However, almost as soon as it went up it was spotted by an angry citizen who took it down, called police, and threw in a nearby trash bin. But the “Guerrilla Knitters” recovered the leafy shroud and vow to continue their efforts.

“I wanted to do some kind of knitting intervention with the Confederate statues because I believe they serve no useful or artist purpose,” says Margo Smith, the Charlottesville resident, avid knitter, and director of the Kluge-Ruhe Aboriginal Art Collection at the University of Virginia who spearheaded the project, aptly named the Kudzu Project [https://www.thekudzuproject.org/]. “They have divided our society and reinforced inequality and racist ideologies. The only upside is that what happened in Charlottesville exposed this wretched history and we now have the opportunity to make things better by removing them and addressing some of the more deep seated and pervasive forms of racism that are endemic even in our progressive well-meaning community.”

Smith says more than 30 people from the mid-Atlantic region knitted the leaves and vines for the project and helped assemble it. More than 20 others advised and participated in other ways.

“We wanted to keep the project secret for maximum impact so it was not circulated on social media,” says Smith. ” It was passed through personal networks from one knitter to another.”

Smith says she didn’t even know all the people who contributed to the project, but says she felt connected to them each time a package of leaves arrived in her post office box.

“I can’t even calculate the hours of labor that went into the project, but it was in the thousands,” says Smith. ”

Smith says she wants people to think about kudzu as a metaphor for these statues, as kudzu seems almost synonymous with the South, even through it was an introduced and highly invasive species.

Like what you’ve read or found out about on the DTM? Consider becoming a DTM Patron.

“Kudzu-covered ruins elicit romantic notions of the past just as the statues seem to memorialize and valorize our ancestors,” she says. ” Yet there is a more sinister history hidden beneath this covering. It isn’t only the history of enslaving Africans and African Americans, and individuals like Jefferson enslaving his own children. What is even more egregious about these particular statues, that some believe represent their heritage, is that they were actually placed strategically to intimidate and oppress African Americans. We need to take them down or, failing that, plant kudzu around them and let nature take its course.”

Pending any possible trespassing charges the group might see, Smith says they will lobby City Council to shroud the statue, and others.